I already published the said title before but a disaster happened and I accidentally deleted the previous article and it was my dumb fault that I also permanently deleted it. I’ll try to recall as much of it as I can to tell you our story during our hike to the said wonder of La Union. As I recall I tried sleeping early during that … END_OF_DOCUMENT_TOKEN_TO_BE_REPLACED

Back in the day (God I feel so old.) ambiance wasn’t really a big factor for dinning as long as your food taste great and affordable you are in. That philosophy hasn’t changed much for this restaurant that we are dinning at tonight.  Balajadia Kitchenette has been an institution for providing great meals at really affordable rates. The meals that cover from nose to tail … END_OF_DOCUMENT_TOKEN_TO_BE_REPLACED

I’ve been cooped up inside of our compound for a bit, mainly because I’ve been doing some stuff at home that relates to fixing the drainage, moving some loads of rocks and also sorting out some stuff. It let me perspire and do some back breaking things which  was good but being stuck in here for too long will drive you nuts. I have to … END_OF_DOCUMENT_TOKEN_TO_BE_REPLACED

Every year from 2010, my photographer friends from Baguio Photographers Club would go ahead and take Photographs of the first sunrise of the year and after that would have a hearty breakfast somewhere in the city (we always ended up looking for restaurants since most of them are closed during the new year morning opening up only during the afternoon.) This has become our tradition … END_OF_DOCUMENT_TOKEN_TO_BE_REPLACED

2017 has lapsed, and today is a mark of a new year. The previous year has brought me lot’s of joys but also very deep sorrows. Late last year some events crippled me in a whole lot of ways. Pain and sorrow haunted me. It broke me in a lot of ways. I lost focus. My heart was heavy and I couldn’t think straight. It … END_OF_DOCUMENT_TOKEN_TO_BE_REPLACED

I’m currently residing in La Trinidad, Benguet and unfortunately we don’t have a working airport that connects us to domestic destinations. We have to travel to either Manila or Mabalacat. I was bound to travel to Batanes on October 22nd for a friends wedding and I have to be at the airport at least 2 hours before the flight time to avoid the hustle. Before … END_OF_DOCUMENT_TOKEN_TO_BE_REPLACED

This Photo was taken back at January 1st of 2017. It was a rainy morning and we were a bit disappointed since we were starting the year wet and cold. This photo was taken at Mines view park from the view deck. We were crazy enough to force ourselves to wake up (for my case not sleep) after a night of celebrating the new year,  … END_OF_DOCUMENT_TOKEN_TO_BE_REPLACED

Events in a persons life has and will always be important and celebrating it amidst any status should be more or less valued. But the question is what if I can’t afford to celebrate it? What if I don’t have the budget or the man power to cover such an event? Here in the cordillera’s we have a practice wherein family, friends and members of … END_OF_DOCUMENT_TOKEN_TO_BE_REPLACED

I don’t really have a lot of pictures to show about how I lived my life specially during my high school and college years.  If ever I had pictures is its because a relative brought a camera during a certain celebration or a classmate or friend brought a camera to the event. But it was only a few pictures, never really had an album specifically … END_OF_DOCUMENT_TOKEN_TO_BE_REPLACED 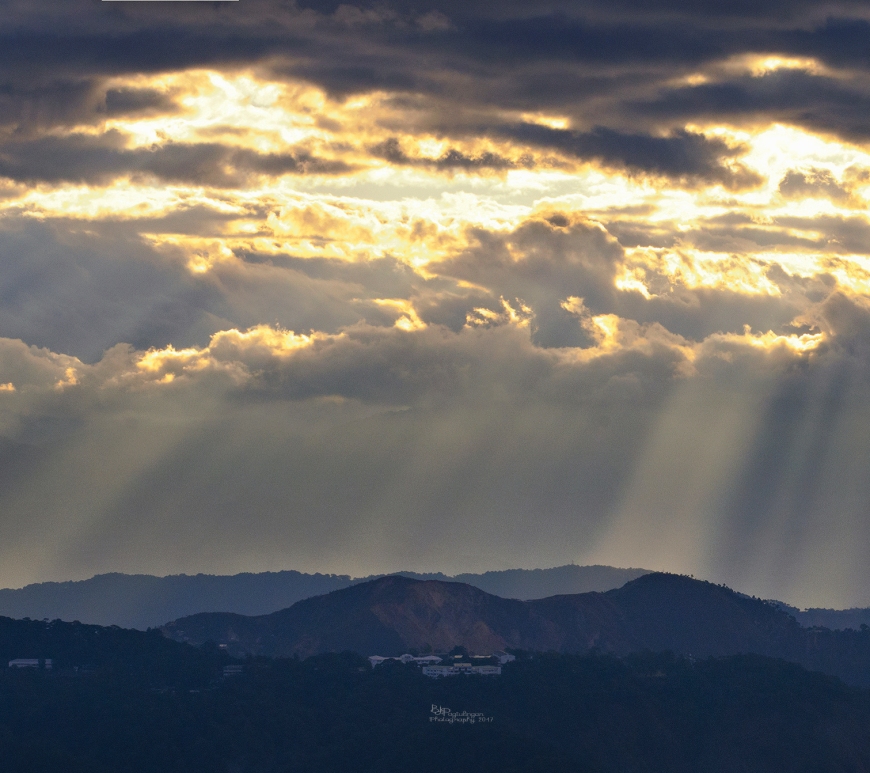 A few hours before this scene happened I didn’t really expect anything spectacular to  come out. The scene was gloomy and cloudy. It hopeless. Deep down I was praying for a miracle to happen. The sun rose and still nothing. Only dry colors and an even gloomier feel for the day.  Just when we were packing up and getting ready to leave, this happened. It’s … END_OF_DOCUMENT_TOKEN_TO_BE_REPLACED

This photograph was taken at the La Trinidad Strawberry Farm back in November of 2011. The garden plots were being readied for the plantation of the strawberries at this time. November here in the Cordilleras is the time when the temperature starts to drop, but the rain comes to a hold which is the ideal climate for strawberries to grow. Dry and cold. The initial … END_OF_DOCUMENT_TOKEN_TO_BE_REPLACED

The view of the sea always gets me into a trance. The sound of the waves crashing is like a song putting me at ease. The wind carrying a little splash cools the warm day that passed. As the sun sets, its color sedates me and brings me to a halt, appreciating the canvas presented. Signaling yet another day finished. As darkness engulfs the light, … END_OF_DOCUMENT_TOKEN_TO_BE_REPLACED

I’m a Photographer, Foodie, frustrated traveler and I do stuff in between.

Missing the beach feels and scenes like this. I miss the travels and indulging on the scenery along the way. Hoping to feel the sand under my feet, and the humid sea air again soon. #travel #gonzagacagayan #cagayan #summerfeels #seasidescenes #benderdonedat #benp_photography
looking back st a memory of home and the canvas colors of early light. #ricefiields #bambang #nuevavizcaya #sunrise #fireinthesky #benp_photography #benderdonedat
Going out on market days can be pretty exciting specially for my trigger finger. to capture scenes which depicts the times and events encountered is a blessing that I am thankful for. The side walk vendor most of us are out of jobs forcefully due to the covid19 pandemic but with some people they are forced to work and brave the situation in order for them to earn a living. #covid19 #covid19life #streetphotography #latrinidad #benderdonedat #blackandwhite #benp_photography
Sunsets can be comforting, a reminder of a day ending and a new day starting again tomorrow. I missed seeing views like this. I wish I had my camera at that time but my phone is the only thing I had handy. #sunset #balili #landscape #mobilephonephotography #benderdonedat
Scenes like these calm me down..it brings me to a somewhat meditative state and allows me to be in a sense of peace. I hope we get to see scenes like this again soon. I hope we get to see the day that this virus will go away for good. But I guess things will never go back to the way it was and we will probably have to adapt to the new norm. #launion #sunset #seascape #reflections #covidchronicles #missingthesea #newnormal #nostalgia #benp_photography #benderdonedat
on my last grocery run I got to ride on a jeep one thing I observed is that social distancing is still applied, mask is an accessory you cannot forget to bring else you might need to go home early or worst pay fines. #covid19life #socialdistancing #mobilephonephotography #thenewnorn #latrinidad #benderdonedat
there's a sense of longing looming inside of me..wanting to go out and take pictures around and on the streets but i know going out will put myself at risk hence i only let myself bring my phone and use its camera and take pictures during my grocery run. Life now has changed from what it was before, and i think adopting to it has to happen inorder for us to survive...social distancing, a whole lot of disinfecting, mask wearing and going on full survival for food runs #covidchronicles #covid19life #groceryshopping #benguet #benderdonedat
People here in my end are generous specially if they have a lot...they share...all you have to do is just get some and all they'll probably ask is not to waste it. bless their generous souls 😊 #freevegies #covid19 #generoussouls #balili #cordilove #covidchronicles #benderdonedat
Summer in the highlands has already started, rain is its very indicator. It has been pouring every afternoon for the past days ...along with it I hope it washes away the virus that has been keeping us indoor along with the negativity that comes with it. #rain #summerrain #benguet #benderdonedat
Super moon? well looks the same but just posting it here for everyone's viewing pleasure 😁 #supermoon #pinkmoon #moon #luna #benp_photography #benderdonedat