Haven’t written anything for a while or the more correct term is I haven’t finished writing the other things I wanted to share. For now I’m just trying to recall my most recent encounter with one of Sagada’s tourist spot. Now you might be thinking that the place is cliche and has been associated with the Filipino Movie: That Thing Called Tadhana(Destiny). But it’s not everyday that someone encounters the perfect scenario for a certain location.

We recently covered a wedding at the Town of Bauko Mt. Province. El Garahe Studios brought me again to another traditional Highland wedding, with a Gracious host and a new town to discover it was supposed to be another adventure. Unfortunately we didn’t really have the time to immerse  in this wonderful place. By the time we were done with the wedding, rain poured and almost got us drenched. The things I saw along the road makes me want to explore this town, hopefully, some other time. But for now we head over to Sagada.

It is not my first time visiting this place and I have certainly been in this tourist town several times now. By now I can more or less determine where to buy stuff that will give me a local price, specially when buying stuff for home cooking. (Yes I have cooked for some friends here and its nothing fancy, just something to spice things up specially when we end up drinking Gin (Ginebra) or other alcoholic beverages. Yes I cook, but not on a chef level, probably only enough to consider it edible and tasty to my palate.). I just whipped things I can find this time. I was tired from the wedding and didn’t have that much sleep so pardon me for the people I fed during that time, its not the best, hoping I can do you guys more justice next time. ^_^  So we stayed near Rock Inn and Cafe. Toppers Cousin (Gao and his wife Tracy) accommodated us in their wonderful home. Refer to the pictures below for a piece of their heaven.

They also accept transients for groups. You can contact Tracy for inquiries. Her number is 09159596377. Ask them to light the dap-ay is this is one of the things I fancy whenever I am in Sagada. The warm feel of the bonfire, cold beer in my hand and the chilly atmosphere the place gives out.

After a night of booze and eating, Me and Joan (our esteemed Same day edit editor in El Garahe Studios Photo) decided to go head for an early morning walk to Kiltepan. I assure you it is safe, even though its dark and the only thing lighting our path was the setting moon. I think Kiltepan was around 2 km from where we were staying. It was a slow walk since the road was kind of slippery and if you have been to rock inn the road is not ideal for worn out shoes, it rained the previous day and it was kind of misty. I wish I brought my tripod with me and took a picture of how the place looks like with the moon just lighting the whole place.

The trek ain’t Bad its just that I’m not used to the terrain and my leg muscles were starting to cramp. I’m not the healthiest person around but I love slow walks and just taking it all in. Being in the moment actually is just fun up until the cramps kick in. As my ailing legs were about to cramp, we reach a point wherein we can almost see the view of Kiltepan and to my surprise…There it is the famous view covered with the sea of clouds. We were lucky. I think Joan was the one who brought it with us. Its her first time and yet the clouds were there.

I guess its true what they say that Kiltepan can heal you. My limbs were aching but now its all healed up. The view is that spectacular that it can take away your aches and sorrows.

There were a lot of people around but the good part is we were able to secure a decent spot to witness the sunrise. 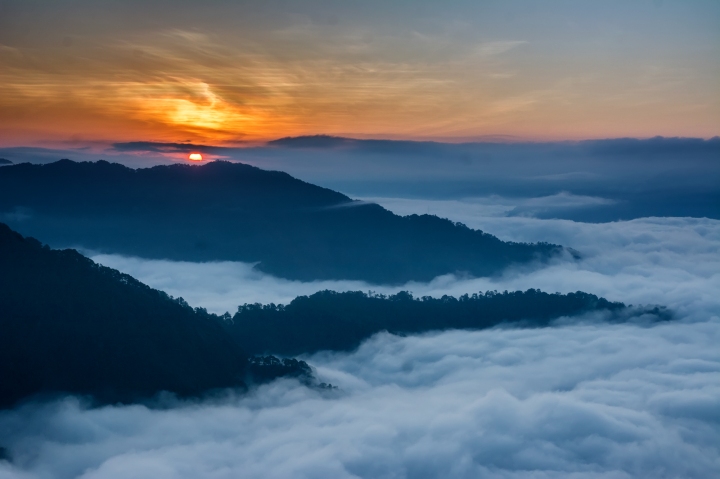 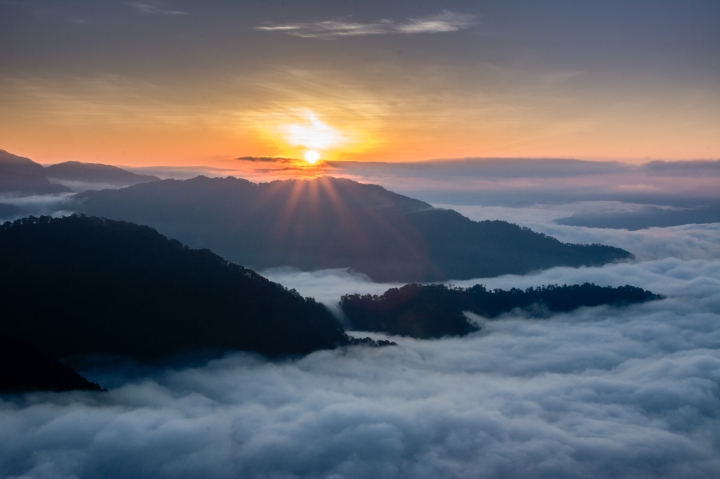 After capturing that breath taking sunrise we played a bit. Goofing of taking photos and looking for a good spot to get coffee or any hot beverage we can scour. 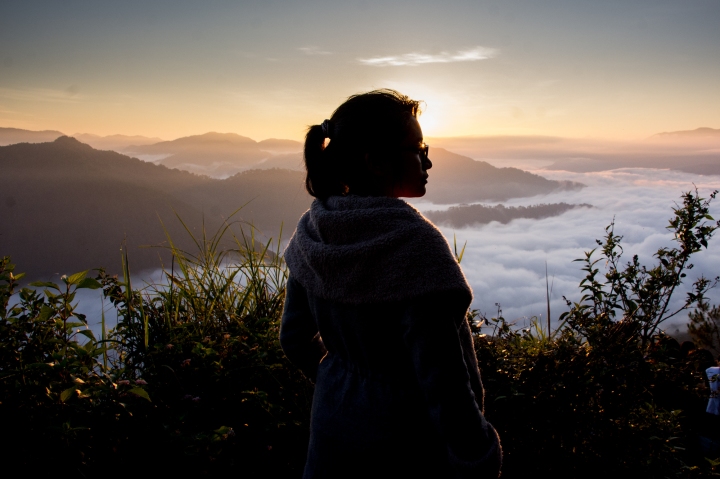 I remember before there were no stalls where you can buy coffee or breakfast around but now there are stalls that can give you a good caffeine fix. Affordable too and not overly priced. You got a choice between the instant vs. the brewed. We definitely opted for the brewed coffee.

After our caffeine fix we now head back. Along the way we encountered a lot of scenes which looks great so we continued playing around as we walk back to rock inn. The pictures below are some of the photos we got with my model hehe.

Overall this was a very lucky morning and I have to say I haven’t been lucky for a while. Hopefully we’ll encounter again this scene and be lucky to capture another moment like this and savor it.

One thought on “Taking a chance at Kiltepan Peak”

I'm a Photographer, Foodie, frustrated traveler and I do stuff in between View all posts by Ben der done that

I’m a Photographer, Foodie, frustrated traveler and I do stuff in between.

Missing the beach feels and scenes like this. I miss the travels and indulging on the scenery along the way. Hoping to feel the sand under my feet, and the humid sea air again soon. #travel #gonzagacagayan #cagayan #summerfeels #seasidescenes #benderdonedat #benp_photography
looking back st a memory of home and the canvas colors of early light. #ricefiields #bambang #nuevavizcaya #sunrise #fireinthesky #benp_photography #benderdonedat
Going out on market days can be pretty exciting specially for my trigger finger. to capture scenes which depicts the times and events encountered is a blessing that I am thankful for. The side walk vendor most of us are out of jobs forcefully due to the covid19 pandemic but with some people they are forced to work and brave the situation in order for them to earn a living. #covid19 #covid19life #streetphotography #latrinidad #benderdonedat #blackandwhite #benp_photography
Sunsets can be comforting, a reminder of a day ending and a new day starting again tomorrow. I missed seeing views like this. I wish I had my camera at that time but my phone is the only thing I had handy. #sunset #balili #landscape #mobilephonephotography #benderdonedat
Scenes like these calm me down..it brings me to a somewhat meditative state and allows me to be in a sense of peace. I hope we get to see scenes like this again soon. I hope we get to see the day that this virus will go away for good. But I guess things will never go back to the way it was and we will probably have to adapt to the new norm. #launion #sunset #seascape #reflections #covidchronicles #missingthesea #newnormal #nostalgia #benp_photography #benderdonedat
on my last grocery run I got to ride on a jeep one thing I observed is that social distancing is still applied, mask is an accessory you cannot forget to bring else you might need to go home early or worst pay fines. #covid19life #socialdistancing #mobilephonephotography #thenewnorn #latrinidad #benderdonedat
there's a sense of longing looming inside of me..wanting to go out and take pictures around and on the streets but i know going out will put myself at risk hence i only let myself bring my phone and use its camera and take pictures during my grocery run. Life now has changed from what it was before, and i think adopting to it has to happen inorder for us to survive...social distancing, a whole lot of disinfecting, mask wearing and going on full survival for food runs #covidchronicles #covid19life #groceryshopping #benguet #benderdonedat
People here in my end are generous specially if they have a lot...they share...all you have to do is just get some and all they'll probably ask is not to waste it. bless their generous souls 😊 #freevegies #covid19 #generoussouls #balili #cordilove #covidchronicles #benderdonedat
Summer in the highlands has already started, rain is its very indicator. It has been pouring every afternoon for the past days ...along with it I hope it washes away the virus that has been keeping us indoor along with the negativity that comes with it. #rain #summerrain #benguet #benderdonedat
Super moon? well looks the same but just posting it here for everyone's viewing pleasure 😁 #supermoon #pinkmoon #moon #luna #benp_photography #benderdonedat